When I was looking for this episode of Saved by the Bell, I totally missed it at first on Netflix. I thought with this kind of title it must have be about an athletic event and could not possible have anything to do with Native Americans. They wouldn’t use such an insensitive title for a very special episode, right? Well, I was wrong.

So you are in for a real treat with this one.

As it turns out, this episode does involve a track meet, but this only bookends the story. Also, the entire gang is on the track team except for Kelly who is a cheerleader (for track and field?) and Screech. I guess they left Screech out of the sport because he is a nerd, but he looks way more like the track kids I knew in high school than anyone else on this show does.

Anyhow, the crux of the episode is that the gang has to do a history report on their ancestors. Slater’s ancestors were bullfighters, Screech’s ancestors were Italian spies, and I seriously feel like they did not mention Kelly’s ancestors at all. Perhaps, they were cheerleaders at the Circus Maximus. Lisa’s ancestors escaped slavery and helped others to do the same through the Underground Railroad. Lisa says, “My family calls this underground railroad the original soul train.” Lark Voorhies breaks for a second and scoffs at this line because what writer ever decided to compare escaping slavery to a dance show? Seriously.

In this episode, Jesse has a lot of white guilt because her ance

stors were slave traders. To make matters worse she has to present immediately after Lisa and right next to her poster of the Underground Railroad. I know you might want to give Jesse some credit for being aware of her white privilege, but that is not even the case here. She basically spends the entire day harassing Lisa because she feels bad and wants Lisa to make her feel better by letting her do random things for her. Lisa eventually threatens to beat her up if she does not leave her alone, and seriously no one could blame her if this thing came to blows. It’s like all of the energy Jesse usually devotes to flirtatiously calling Slater a misogynist is suddenly devoted to bribing Lisa and it is super annoying. Then it is Zack’s turn to present about his Native American forefathers. Screech helps him present by “being” a Native American prop, I think…

Luckily, his teacher calls him out on being a total jerk. He obviously knows nothing about history—he says his family is Cherokee from Burbank—so perhaps she should also be pissed at her own lack of efficacy. His teacher conveniently knows a chief, who educates Zack on his ancestors. On their second meeting he greets him as “Running Zack.” He says, “You run, you’re Zack, it works.” Then he offers this valuable lesson in cliches and offensive statements about why the “Indians” and the “white man” have such a gruesome history: 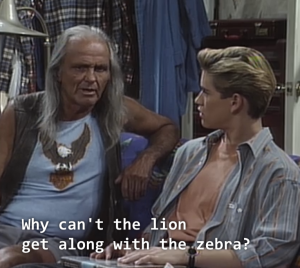 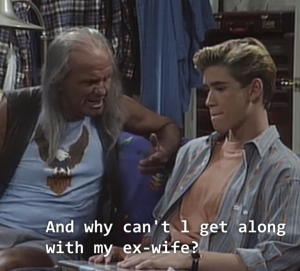 Zack finally gets his A when he comes to class in full stereotypical Native American garb. Poor Mark-Paul Gosselaar. What sixteen year old wants to dress up as a stereotype of a culture to which he has no actual relation? And as a job requirement? The worst part of all of this is that I truly feel like Saved by the Bell‘s heart was in the right place. They set Zack up with this whole it’s bad to stereotype, it’s important to know where you come from, and we need to respect other cultures plot-line. But then the writers/producers/tween Saturday morning audience either had or expected so little actual knowledge of history and culture that this episode ends up confronting one cliche with another cliche.

But then, things really get heavy when Chief Henry dies. There are only six minutes left in the episode! How are we going to wrap this up? Oh, of course, a dream sequence. And what do you suppose happens in said dream sequence? Chief Henry gives Zack a message on a handmade headband: Beat Valley. [In the track meet, you guys. Maybe you already figured that out, but I wanted to clarify just in case I skipped over the track meet part of this episode a little too much.]

10 thoughts on “Saved by the Bell: Running Zack”

This site uses Akismet to reduce spam. Learn how your comment data is processed.